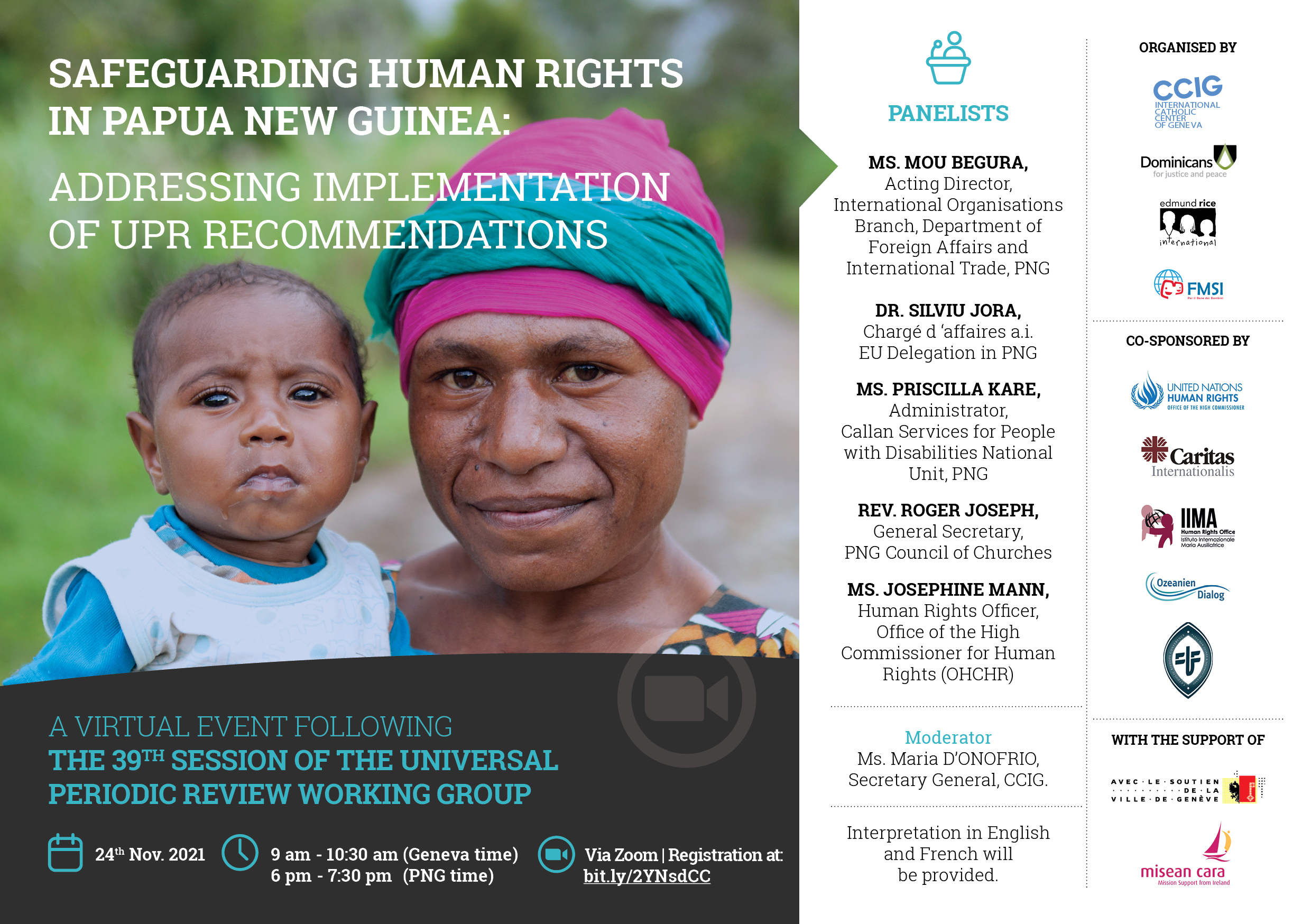 Organized by the International Catholic Center of Geneva (CCIG), in collaboration with the
Dominicans for Justice and Peace, Edmund Rice International (ERI) and the Marist Foundation for International Solidarity (FMSI), the side event ‘Safeguarding Human Rights in Papua New Guinea: Addressing Implementation of UPR recommendations’ took place on 24th November 2024, following the 39th session of the Working Group of Universal Periodic Review. This event was facilitated by the support from the City of Geneva and Misean Cara. It was co-sponsored by the Office of the High Commissioner for Human Rights, the Catholic Bishop Conference in PNG, Caritas Internationalis, Istituto Internazionale Maria Ausiliatrice and Ozeanien-Dialog.

This event is conducted within the frame of a larger scale project developed by the CCIG, the Dominicans for Justice and Peace, ERI and FMSI as well as a coalition of sixteen civil society organisations based in Papua New Guinea. The project, entitled ‘Papua New Guinea: Human rights enhancement through the Universal Periodic Review Project’ started in December 2020 and aimed at strengthening the capacity of local civil society to report, monitor and follow-up the most pressing issues in Papua New Guinea through the Universal Periodic Review. This initiative was made possible by the fund support provided by the Ville de Genève and Misean Cara.

The project specifically aimed at addressing issues related to the rights of women, children and people with disabilities and environmental protection. As a unique State-driven process during which the human rights record of all 193 UN Member States is reviewed once every four and a half years, the UPR provides a great opportunity to bring forward human rights issues in Papua New Guinea to the attention of the International community.

Moderated by Ms. Maria D’Onofrio, CCIG Secretary General, the panel featured a wide array of expertise, experience and knowledge of the human rights situation and challenges in Papua New Guinea. Among them were two local partners of the PNG-NGO coalition: Ms. Priscilla Opa-Kare and Reverend Roger Joseph. Ms. Mou Begura from the Department of Foreign Affairs and International Trade represented the PNG government. Dr. Silviu Jora from the European Union Delegation in PNG and Ms. Josephine Mann from the OHCHR completed the high level panel.

The first speaker was Ms. Begura who had been part of the taskforce designated to prepare the national review report. She presented five challenges in the State’s task of implementing the 3rd UPR Cycle Recommendations: (1) education and awareness of educating citizens of their human rights; (2) the problem of effectively implementing domestic human rights laws and policies, due to malfunctioning governance system and political influence; (3) lack of effective inter-governmental coordination of all efforts by all parties involved in the implementation of UPR recommendations, leading to duplication of roles, inability to share vital information and data, and most importantly, the lack of collaboration between society and Government; (4) appropriately managing vital resources to compliment the work of the civil society and relevant Government ‘agencies; and lastly, (5) a need for better coordination and control of the domestic implementation of work programmes of development partners and ensuring closer working relationship between national coordination points and development partners and civil society organizations. She concluded that on the road to drawing the implementation plan, they focus on forging channels of ongoing networking and open dialogue with the civil society, especially human rights workers nation-wide and to develop a stakeholder mapping for the work towards UPR 2025.

Ms. Kare of Callan Services for People with Disabilities National Unit, tackled three areas of concern for the 16 local NGOs coalition: (1) the rights of women, specifically on gender equality, women’s right to participation in decision-making processes and the eradication of violence against women, including sorcery accusation related violence; (2) the rights of children, mainly accessibility and affordability of primary and secondary education, access to adequate health services and facilities, improvement of juvenile justice and appropriate handling of children in conflict with the law, and protection of children from domestic violence; (3) the rights of persons with disabilities, primarily freedom from all forms of violence, stigma and discrimination, access to inclusive education for children, lack of a national disability data management system and freedom to enjoy to exercise their political and voting rights. She concluded by reiterating their commitment as civil society organizations to support any positive actions of the Government to grant women, children and people with disabilities, the full exercise of their rights in Papua New Guinea.

She was followed by Reverend Joseph who is the General Secretary of Papua New Guinea Council of Churches (PNGCC). He highlighted environmental protection as a priority for PNG. He stated that PNG is rich with natural resources, yet the majority of the rural based population continues to live in poverty. The country faced improper tailing waste management practices which failed to prevent toxic wastes from spilling and the uncontrolled destruction of rainforest through round timber harvesting. These resulted in huge environmental damages to PNG’s land, waterways and sea, threatened the livelihood of communities living along impacted areas and eventually leading to violence and death during the ten-year civil war in Bougainville. He also cited how resistant and resilient groups protested against mining activities in order to protect the land and sea and their livelihood. He underlined the nine recommendations addressed to the State concerning environmental issues and explicit references to business activities and its impact of the enjoyment of human rights in PNG. He concluded by reassuring that Churches and Civil Society are available to work hand in hand with the State for a better protection of the environment.

The Chargé d’affaires a.i. of the EU Delegation in PNG, Dr. Silviu Jora expressed his appreciation to CCIG and its partners for providing a venue where local grassroots organizations, human rights defenders, the diplomatic community and national authorities can come together to dialogue and work for the improvement of human rights promotion and protection in PNG. He cited the invaluable information received during the 28 June 2021 advocacy meeting that helped in the drafting of EU’s input for the UPR of PNG. Among the salient points he underlined were the need to establish a Human Rights Commission and the ratification of a number of Human Rights Conventions. He commended the State on the progress it has made to fulfil human rights commitments from the 2nd UPR Cycle and at the same time pointed out that much still needs to be done especially on the implementation side. Furthermore, he stressed EU’s continued commitment and support to human rights defenders; empowering GBV victims to pursue prosecution of culprits, supporting women rights through EU Gender Action Plan, allocating resources to combat sorcery related violence, and continuing the advocacy for the abolition of Death Penalty. He concluded by lauding the vibrant freedom of expression in PNG which allows for an active and lively press and media ready to expose and condemn human rights violations as well as the very active and participative civil society, particularly the faith based organisations.

Finally, Ms. Mann from the OHCHR presented the various thematic areas that have been gathered from a total of 108 recommendations reviewed based on the previous cycle. These include ratification and reporting, operational treaty bodies, institutions and policies, implementations of human rights treaties and obligations. She added also themes on equality and non-discrimination, administration and access to justice, rule of law, rights to freedom of opinion and expression, right to association and assembly, right to life, liberty and security, right to health, sustainable environment, and children’s rights, rights of refugees and asylum seekers and maintenance of peace and stability in the Bougainville Region. In conclusion, she reaffirmed the OHCHR’s commitment to work with the government of PNG, civil society organizations, Churches and other stakeholders and partners in ensuring that the State takes in these recommendations of the 3rd cycle.

An interactive dialogue followed the presentations from the speakers. More detailed information on the event, including its executive summary and recorded video, are available on the PNG project dedicated page in CCIG website.